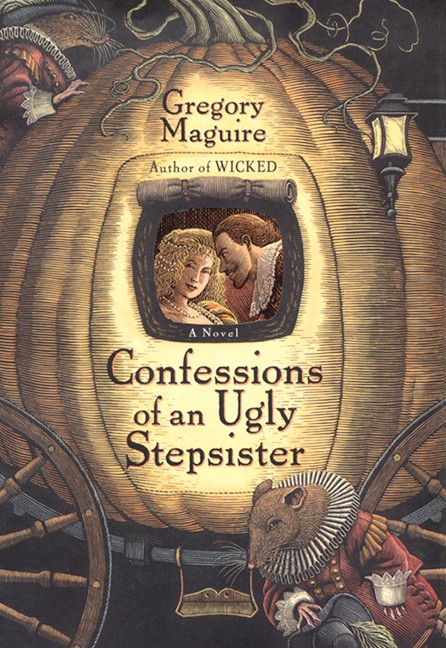 My love for Gregory Maguire has not gone unnoticed; my little bookslut affection for his work is well documented. But I must admit to being a little wary to venture outside of the Wicked series. Maybe my fascination with him was really with his Oz. I loved Wicked and Son of a Witch, and I trust I may have equal affection for A Lion Among Men, but what of these non-Wicked tales. He successfully tackled The Wizard of Oz, but I never much cared for the original. What would happen when he tackled A Christmas Carol? And such beloved fairy tales as Snow White and Cinderella? I shuddered at the thought. (Okay, so I didn’t really shudder, but such language makes for a more dramatic reading.) Enter used bookstore and used bookstore credit. Lost (where Maguire takes on Dickens with a bit of a serial killer just for fun) and Confessions of an Ugly Stepsister now belong on my shelf next to the Wicked books.

Published in 1999, Confessions of an Ugly Stepsister is Maguire’s second adult novel, the first being Wicked. It has a quite lovely cover as well. Disney made it a TV movie a few years later, but I’ve never seen it. I wonder if Disney managed to fully capture the dark & ugly.

Set in 17th century Holland, the novel revolves around two sisters, Iris & Ruth, and their eventual step-sister, Clara. Other central characters are Margarethe (their mother), the Master (Luykas Schoonmaker – the painter), Casper (the Master’s apprentice), Henrika & Cornelius van den Meer (Clara’s parents), van Stolk (a greedy business associate of van den Meer), the Dowager Queen of France (in Holland to have her “final” portrait painted), and the Prince of Marsillac (in Holland to have the Queen Mother find him a bride.) There are other figures, imps and changelings, gypsies and dwarfs – it is a fairytale after all, is it not?

The novel is divided into five sections, not including the prologue and epilogue, and each section is divided into several chapters. The titles Maguire chooses are beautifully fairy-tale-esque. Fancy that.

Prologue – Stories Painted on Porcelain
The novel opens with a very old lady coming across a group of children acting out the story of Cinderella. She questions the fancy of their story, the magic in it, that the real story is void of. “In the lives of children, pumpkins can turn into coaches, mice and rats into human beings. When we grow up, we learn that it’s far more common for human beings to turn into rats” (x). Clara and Casper are introduced in the prologue, but the reader does not know which “ugly” stepsister tells the tale until the epilogue.

“The Obscure Child”
This first section introduces the reader to all the main players of the novel. It starts with the mystery of Clara, the changeling child, and concludes with Iris, Ruth, and their mother moving into the van den Meer home. Iris also poses for the Master in this first section and the painting horrifies her – her dullness is placed in a beautiful painting. He used her unattractive qualities to bring forth the beauty of the wildflowers, naming the work “Girl with Wildflowers.” Iris is distraught at the painting. She loathes it, but the painting earns him the commission from van den Meer to paint Clara, the golden child. The whole family moves in with the van den Meers as they want a child for Clara to play with and learn English from.

“The Imp-Riddled House”
The second section begins to let readers know that all is indeed not well in the van den Meer household. The children are convinced there is an imp living amongst them, and they half believe Clara’s tales of being a changeling. Clara refuses to leave the house; she is sequestered there by her own will (and that of her mother’s). The Master paints her with the tulips (her father is a tulip merchant and this is their fortune). It’s a beautiful portrait – her beauty lovingly portrayed by the Master’s genius. The portrait is successful – van den Meer becomes wealthy as people buy into the tulip trade. Meanwhile, in the domestic affairs, Margarethe continues to edge her way into the household, demanding payment for her work after the successful tulip portrait venture.

“Girl of the Ashes”
The third section of the novel details the birth of Cinderella – or Clara’s fall into the ashes. A pregnant Henrika dies. Clara leaves the house to go ice skating and her kidnapping story is revealed. Clara and Iris end up at the windmill where Clara had been hidden so many years ago, and a vacant look takes over. Clara becomes more and more distant, refusing to leave the hearth and covering herself in ashes. Margarethe marries van den Meer and becomes a gaudy woman with hideous taste. Iris becomes an apprentice under the Master and begins to fall in love with Casper. Mr. van den Meer becomes quite sick and watches as his fortune trickles away.

“The Gallery of God’s Mistakes”
Enter the Dowager Queen come to arrange a marriage for a distant relative, a godson, Philippe de Marsillac. Iris looks upon what the Master calls “the gallery of God’s mistakes” for the first time and sees the paintings of dwarfs, a child with the face of a parrot, a Girl-Boy, and other such “errors.”

“I think of them as friends,” says the Master, “for aren’t we all bruised?”

Clara retreats even further and the creditors begin to dismantle the house. Fittingly, Margarethe prepares for the ball. She hints that she may have promised Clara’s hand in marriage in order to pay for her gowns. (Well, it isn’t so much a hint.) Iris decides that Clara must go to the ball and must win the prince. She does this because she doesn’t want the prince – she wants Casper. Ruth blinds Margarethe by putting red pepper in her eye balm, which works out perfectly as Margarethe won’t be able to see the pretty stranger at the ball.

There is no pumpkin. No glass slipper. No fairy godmother. Casper gets the gown and while Margarethe tries to make him out to be one, he is a far from a fairy. (Iris’s mother tries to convince her that Casper is a homosexual because she doesn’t want her daughter to end up with him.) Clara adopts the name Clarissa Santiago of Aragon and stands gorgeous in white shoes, a golden gown, and a black lace veil. (Please note which section this occurs in.)

“The Ball”
Iris meets the Prince and has a lovely conversation with him. Clarissa walks in and he is smitten. Iris talks with the Master, dances with Casper, and tries not to be jealous that Casper seems to find Clarissa beautiful. (She fails at the latter.) Ruth burns Clara’s painting.

Later that night, a confession occurs; Margarethe poisoned Henrika and her unborn child. The reader also clearly learns that she was forced out of England for being a witch. Upon hearing this, Clara is transformed. She saves Ruth from being punished for setting the fire and marries the Prince. Casper ends up with Iris. Ruth ends up not quite as dumb as they all thought her to be.

Epilogue “Stories Written in Oils”
And so the reader discovers that Ruth has told them the story of the pretty girl and her not so wicked (or ugly) stepsisters. Iris and Clara are dead. Margarethe is blind and Ruth does not talk to her about that confession or the night of the ball. Ruth lets the reader know that sometimes memory, even when painted out for the world to see, gets retold incorrectly and that her story may not be the whole truth, but it’s a bit more true that the fairytales.

She does not point fingers or fault anyone. She does not pinpoint a villain or a hero in her story. Perhaps that is what makes it a true confession.

“Crows and scavengers at the top of the story, finches at the top of the linden tree. God and Satan snarling at each other like dogs. Imps and fairy godmothers trying to undo each other’s work. You might be born as donkey-jawed Dame Handelaers or as dazzling as Clara van den Meer, Young Woman with Tulips. How we try to pin the world between opposite extremes” (366-7).

Ruth’s words are beautiful and have a haunting quality that peers out at the reader throughout the entire novel, as if an imp really does watch. She was a fitting choice to tell the story and a bit of a trick on Maguire’s part as it is Iris who is described as so ugly and Ruth as so incompetent. Maguire never lets his readers assume anything. It’s pleasant and he tsks tsks the reader in a loving way for making assumptions.

I love Maguire’s writing and this love officially embraces more than just the Wicked series. Perhaps it is the hour, but I love what he does for fairytales. He captures the darkness that was always meant to be there in a way that a happily ever after never can. It’s a brilliant novel – enchanting and heartbreaking with just the right amount of magic.