Skip to content
The Conquest was published in 2002.  Despite a love of multi-cultural literature developing in earnest about that time, I had never heard of the novel or its author, Yxta Maya Murray, until I picked the work up at a used bookstore over a year ago.  (Have I mentioned that my TBR pile could easily claim its own room?!?)
Yxta is a law professor at Loyola.  Her first novel was published in 1998.  Her latest, A Good Girl’s Guide to Getting Kidnapped, was published in 2010.  As of today’s date, there are six novels in her canon and it would appear her fiction has been replaced by scholarly pieces on constitutionalism, rape, and violence.  The Conquest was her first foray into historical fiction, but she did not commit 100%.  In all honesty, there is so much about this novel that is deliciously amazing but it’s still not quite there.  Don’t get me wrong – I thoroughly enjoyed the story – but it’s almost like ordering dinner and finding it good but knowing a little more seasoning would send it over the top.
I think I connected to the main character, Sara Rosario Gonzales, because I personally have had to face my own life while hunting for the identity of an author of a dusty manuscript.  (My search for Hannah Crafts was brief but it has marked me for life.)  Sara is a rare book restorer who works at the Getty Museum in Los Angeles.  A dusty 16th century manuscript finds its way to her desk to be restored.  The story of an Aztec princess (named Helen by her captors) enslaved and sent to Europe to entertain the likes of the pope and Charles V as a juggler is considered by scholars to be the work of a monk.  Sara is to restore it, but she finds herself made mad by her quest to prove the identity of the woman who penned it.
The manuscript, which Sara has named “The Conquest,” is provided in bursts of passages while Sara’s own love story unfolds.  Truth be told, I don’t like Sara and I don’t care for her love story.  The sections about her and Karl annoyed me as I eagerly awaited more of Helen’s story.  Sara’s hunt to prove The Conquest was written by a woman is at the heart of the novel.  There’s an intensifying suspense as she checks other historical references, using passages from the manuscript as clues to point her in the right direction.  The life of a painter said to be madly in love with the exotic princess.  Does she show in his work?  The written works of others from the Church, written in secret and not for public consumption, did these tales of sex and gluttony reveal the dark-skinned beauty.  Does she find her way into his journals full of food and scandalous affairs?
As Sara’s love life unravels, she resigns herself to the fact that Helen is fictional and indeed the shocking tale of women loving women and made “mad” by poetry, and pirates and obsidian daggers, and juggling spheres that can stop the Pope’s heart is nothing more than fiction penned the monk it has been attributed to by scholars.  Defeated in love and life, she catalogues the work.  She curses the manuscript for having ruined her life as she has lost Karl, seemingly for good.  She contemplates setting the ancient pages ablaze, but she could never hurt a book.  (I understand that sentiment!)  Then, at her lowest of lows, a letter from 1561, a love letter of course, makes it all worth it. 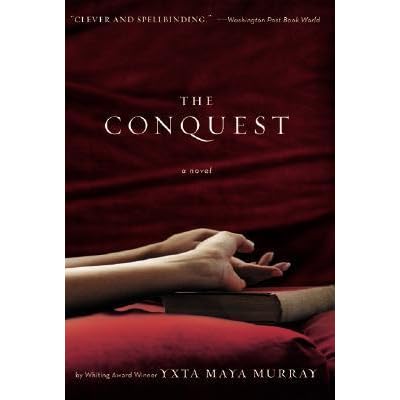 The novel is a love story that crosses ages and time.  It’s Helen moving heaven and earth for her true love, Caterina, and being blinded by her desire for revenge against Cortez.  It’s Sara spending every waking hour trying to breathe life into a manuscript and a woman no one believes existed in her quest to remember her mother.  Yes, this is a love story between Sara and her mother – Karl was an unnecessary distraction and Yxta didn’t flesh out the mother/daughter relationship the way I would have liked, but it’s a love story all the same.  Helen won’t be forgotten.  And neither will Beatrice.