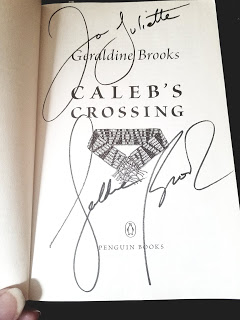 I don’t know who Juliette is, but she left her autographed copy of CALEB’S CROSSING by Pulitzer Prize winning author Geraldine Brooks to be purchased at a used book sale.  ($5 a box – any sized box!!)  I’ve heard of Geraldine Brooks, but only through her husband, Tony Horwitz, who wrote CONFEDERATES IN THE ATTIC.  (He won a Pulitzer Prize for National Reporting for those wondering.) Until I picked up CALEB’S CROSSING, I’d never so much as glanced twice at any of her works.
Published in 2011, CALEB’S CROSSING was inspired by the true story of Caleb Cheeshahteaumauk, a Wampanoag who converted to Christianity and was the first Native American to graduate from Harvard.
The title concerns the “crossing” between cultures – from Wampanoag to White – a full assimilation, while also referencing the crossing between life and death.  Make no mistake, this is Bethia’s story.  As such, the title is a bit misleading; BETHIA IS SORRY would have been a better a choice because this novel is a very lengthy apology for her involvement in the life and death of Caleb.
Bethia met the young man when she was 12.  She gave him the name Caleb, a strong Biblical name.  He named her Storm Eyes, but no one knew but the two of them.  The world, however, knew him as Caleb.  (It reminded me of a scene in CHILDREN OF THE DUST, when Rachel “renames” the “savage boy” Corby White.  A scene, mind you, that played out in history time and time again.)
Caleb eventually converts and leaves his people to study under Bethia’s father.  He is a quick study and he, along with Joel, are the prized jewels to showcase how the “heathens can be saved.”  Joel is murdered just before graduation from Harvard, but Caleb graduates.  By this time, he is but the shell of Cheeshahteaumauk.  He is thin, pale, and his once glorious hair is dull.  His eyes are lifeless.
He’s crossed, but the crossing has killed him.
In desperation, Bethia goes to his uncle, Tequamuck, a powerful pawaaw, for help.
“My nephew is sick?  You think this comes as news to me? My nephew has been sick – indeed, he has been marked for death – from the day he commenced to walk with you, Storm Eyes.”
Tequamuck helps Bethia, and she takes his words to Caleb, the words of his death song.
“All that is true and certain.  But what I do not know is this: which home welcomed him, at the end.”
The novel left me unsettled, as well it should.  It is well-written (though rushed and breathless at times), historically accurate, and engaging.  But it is Bethia’s story – one of privilege and guilt.