Skip to content
“We don’t rent pigs.”
Larry McMurtry is the man who, without knowing who I am, gave me one of the sweetest gifts when he wrote LONESOME DOVE.  Published when I was toddler, the book was turned into a TV mini-series in 1989.  My father recorded it, and those old VHS tapes were likely the most watched movie in our house.  I remember sick days home from school with my father cleaning his Civil War era gun while we watched.  Snow days where we watched.  Lazy Saturdays when the fish weren’t biting when we watched.  I remember being sent to my room or having him fast forward when they crossed the river and disturbed the bed of snakes.  I remember him assuring me that Blue Duck wasn’t real. I remember the way his eyes turned liquid every time Deets died, and how he’d change the subject when I wanted to know what a “poke” was.  I couldn’t wait until I was old enough to go to Montana.  I remember the way he looked when they hung Jake Spoon, and how he told me that some lines can never be crossed.  I have a worn paperback on my shelf at home, and a signed first audition is one thing I’m always looking for.
McMurtry’s beautifully drawn characters – especially Gus and Captain Call – remain some of most my loved fictional creations. 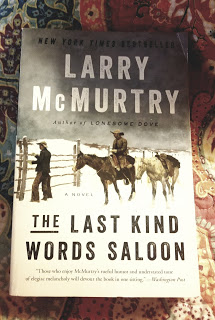 THE LAST KIND WORDS SALOON, published in 2014, immediately brought the Pulitzer-winning novel to mind.  But where LONESOME DOVE was a meal I could eat every day for the rest of my life, THE LAST KIND WORDS SALOON seems a hastily thrown together one sheet meal that relies on some of the same ingredients of the meal I love but doesn’t come close to being satisfying.  The novel is considerably shorter than LONESOME DOVE, but there are some aspects that seem pulled directly from the 1980s work.
The steers in the lightening storm.  The sign that Wyatt totes around.  The reporter.  There are a lot of similarities between Jessie and Gus’s Lorie-darlin’.  The cattle drive to Montana.  The relationship between Doc and Wyatt is very much the same foil as Gus and Call.  Teddy Blue has a lot of Dish in him.  (And it’s been a long time since I’ve read LONESOME DOVE.)
McMurtry takes some liberties in this story of the Earps and Doc Holliday, and some of them just don’t work.  Wyatt’s wife was Josephine, not Jessie, and the timeline of their relationship is horribly wrong in this novel.  This bothers me greatly.
He opens the novel by telling the read “THE LAST KIND WORDS SALOON is a ballad in prose whose characters are afloat in time; their legends and their lives in history rarely match.  I had the great director John Ford in mind when I wrote this book; he famously said that when you had to choose between history and legend, print the legend.  And so I’ve done.”
The fact he plays with the stories and legends surrounding these larger than life figures of the West in the Earps and Wild Bill and Doc doesn’t bother me.  But changing the name of the prominent woman who factored into the life and the legend does.
Additionally, there is also a minor misprint where “Jessie” is printed as “Jesse.”  Much like her name is missing its “I,” this book is missing its heart.
It made me miss the genius that was LONESOME DOVE.