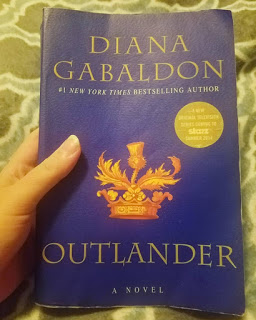 But my attempts to watch it did result in me snagging a used copy of Outlander, the first in the series, during the times I could venture into a used bookstore worry free.  It jumped to the head of my TBR pile because its bright blue cover grabbed my attention when I was looking for my next selection.  I’ve never read anything by Diana Gabaldon.  Truth be told, I was too young for this book when it was published in 1991.  While I do think it is something my grandmother would have enjoyed and she is who often slipped me books that were perhaps a little too sexy for my age (Flowers in the Attic ring any bells?!?), I was wholly unaware of this series until Starz picked it up in 2014.  Even then, it wasn’t something that grabbed ahold of me.  Probably because I didn’t (and still don’t) get those fancy cable channels.  Flash forward a few years to when Netflix starts streaming the first few seasons and the unpopular opinion I opened this post with – I’m not that keen on the TV series.
My thoughts on the book are likely also going to fall along unpopular lines.
I      In short, I never would have been allowed to read this in 1991.  In 2020, I find myself more interested in the meat of the matter, not the meat of the character; I may have waited too late in life to fully enjoy this historical romance with a splash of sci-fi.